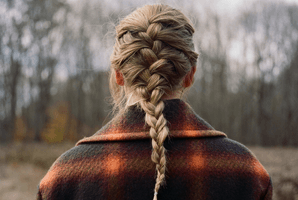 They say lightning never strikes the same place twice, but for Taylor Swift, it most certainly does. A mere five months after releasing her critically acclaimed surprise album folklore, Taylor Swift returned with another surprise album, evermore. Much like folklore, evermore was created in collaboration with Jack Antonoff, Aaron Dessner of the band The National and Justin Vernon of Bon Iver. Additional writing on both albums is credited to William Bowery, which was revealed to be a pseudonym for Swift’s boyfriend, actor Joe Alwyn. The album is a continuation of many of the themes and musical styles featured prominently on folklore.

Like many of the songs on evermore, “champagne problems” sees Swift craft an intricate fictional narrative rather than recount a personal experience. This piano-driven track takes on the perspective of a character who has just rejected a proposal and laments all of the hurt this has inevitably caused their former partner, despite believing it best in the long run. I love the way that the lyrics of the last chorus change to explain all of the ways that someone else will succeed in all of the places the narrator failed. Taylor Swift’s writing is often most effective in the simplest form, led by just guitar or piano, and “champagne problems” is no exception. I have seen others compare this song to Swift’s fan-favorite track “All Too Well,” but it reminds me more of the piano ballad “New Year’s Day” off of her 2017 album reputation. Regardless, “champagne problems” is simultaneously modern and classic, further ensuring that Swift’s work will last the test of time.

The “woman gets revenge on cheating husband” trope might be overused, but this song is just so fun that its redundancy might be forgiven. Swift teams up with sister band HAIM for this country leaning track, again reminding listeners that she never meant to leave the genre for good. “no body, no crime” provides a welcome tone shift in the midst of a mostly somber and emotional album. The song doesn’t take itself too seriously, including some cheekily humorous lyrics, from an Olive Garden namedrop to Danielle Haim’s spoken “she was with me, dude.” While many of the songs on evermore connect to songs on folklore, “no body, no crime,” is one of the few that lack a parallel, adding to the album’s value as a singular body of work rather than just half of a whole.

Songs like “ivy” remind me of why I still listen to Taylor Swift. The track features the strong lyrical metaphors and vivid imagery that Swift does so well when not trying to write radio hits. Like many songs on evermore and its predecessor, “ivy” follows a fictional narrative of a secret romance using metaphors of plants and growth to symbolize the progression of the relationship. Lines such as “I can’t stop you putting roots in my dreamland” are simple and elegant, complementing the sweet melody and string arrangements of the song. Bon Iver’s Justin Vernon provides background vocals on the track. Vernon also duets Swift on the album’s title track, but his vocals here contribute more significantly to the feel of the track, despite being featured in a smaller role. Warm and whimsical, “ivy” is easily one of my favorite tracks from evermore, and perhaps from Swift’s entire discography.

Just as I enjoyed folklore, I really liked evermore. Overall, I have the same praises and criticisms for this album as I did on the previous one as they are so similar in style. Just as was the case with folklore, evermore feels a bit long with a total of 15 tracks, not including the two forthcoming bonus tracks. In particular, the last third of the album slows down the overall momentum of the body of work. Despite my criticisms, I really hope Taylor Swift continues in this direction as this more stripped-back, less commercial style really suits her writing and aligns more closely with my personal taste (although I do enjoy a good pop song). It is a testament to Swift’s songwriting and creative abilities that evermore works as an album on its own and as a sister album to folklore. Listening to both albums back-to-back really allows their thematic similarities to shine through, resulting in a highly enjoyable listening experience. It would definitely be in Taylor Swift’s interest to release a box set or double album version of folklore and evermore. While the albums are great on their own, they really shine when seen as two halves of a whole.

I give Taylor Swift’s evermore four stars out of five. Like folklore, it runs a bit long and the pace drags a bit towards the end, but the new indie-adjacent sound really allows Swift’s writing to take center stage. The songs on evermore offer a bit more variety than is found on folklore, giving most types of listeners something to enjoy.

Did you enjoy evermore? How would you compare it to folklore? Share your thoughts below.