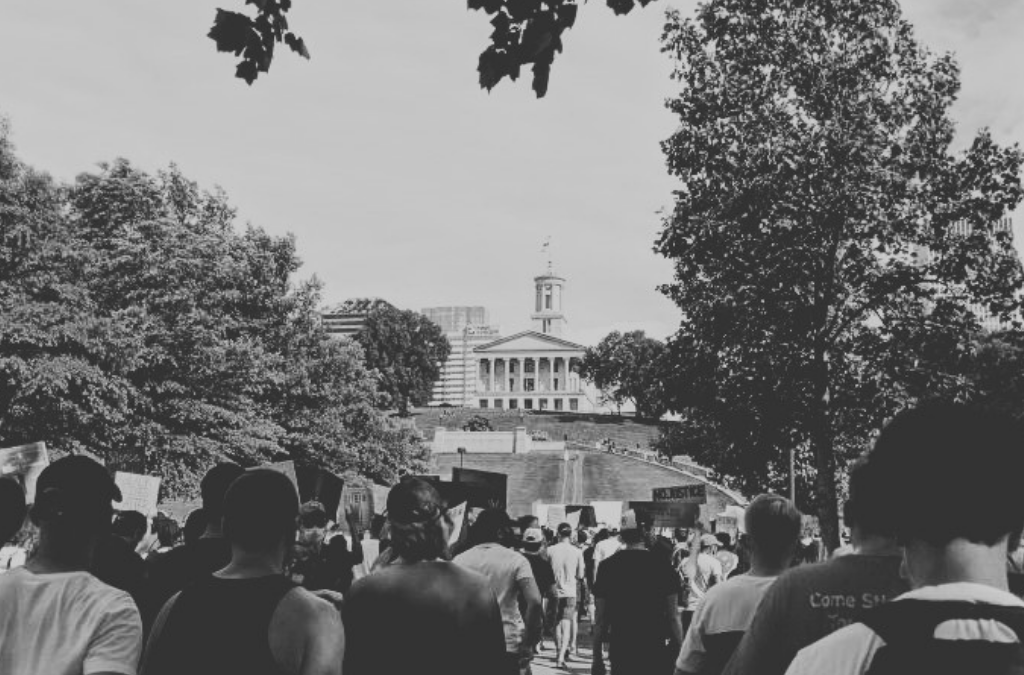 Sparked by the headlines about the murder of George Floyd as well as other Black men killed by police officers and a growing awareness of racial injustice, Lipscomb’s Black Student Union is among the citizens and organizations that nationwide are putting a fresh spotlight on issues too often ignored.

Lipscomb’s BSU President Dorie Harrison said the tumult of the past year has offered her an incentive to reflect upon the past injustices and set goals for the betterment of the future.

Last semester, Harrison, a senior marketing major from Nashville and a Lipscomb Lady Bison basketball player, had a unique experience. In her Legal Aspects class, students watched the video of the death of George Floyd and were instructed individually to decide the sentence of former Minneapolis Police Officer Derek Chauvin (the suspect in Floyd’s murder trial).

Harrison said she recalls feeling shocked as several students didn’t seem to see any wrongdoing in Chauvin’s actions: “To see so many of my classmates say that Chauvin was completely innocent and to go back and justify the death of George Floyd. My hands were shaking.”

As a person of color at a school with a historically high population of White students, Harrison said she often feels put on the spot in these types of situations.

“I was the only Black person in the class, so everyone was looking at me like, ‘Oh, what is she gonna say?’” Harrison said.

Harrison said she has seen a lot of groupthink in her classes. She said people seem to fall in with the majority opinion, leaving little room for those with different viewpoints to speak out.

The death of George Floyd was no exception, she said, noting her reaction was different from that of most of her classmates, putting a burden on her shoulders.

“Obviously when George Floyd was murdered, our heart broke with sadness to Mr. Floyd and his family and anger for an unnecessary death,” Harrison said.

“The police have an extended history of harassing and killing Black bodies in America,” she said, adding that often those officers are suspended from duty but remain on the payroll. In the case of Floyd’s killing, the four officers involved, including Chauvin, were fired the day after the incident.

All officers were later charged, though the most severe were placed against Chauvin, who was shown — on amateur video picked up by national media — kneeling on Floyd’s neck for nine and a half minutes, while audio picked up the struggling “I can’t breathe” uttered by the dying man, who also called out for his mother in his last moments.

Then, on June 25, one year and one month after Floyd’s death, Chauvin was sentenced to 22.5 years in prison.

Harrison said Chauvin’s sentence is minimal and maintains that many people of color serve harsher sentences for smaller crimes. But she also looked on the positive side.

“While I feel like [the verdict and sentence] should be celebrated, that should be the standard,” Harrison said. “So, a year plus after this, I do feel like people are becoming more aware.”

Last year brought about many different debates and a much greater awareness of racial issues, primarily centering on the group known as Black Lives Matter (BLM).

Harrison emphasized that BLM is not just a movement but a worldwide push for systemic change.

“BLM is a global organization,” Harrison said. “There will always be a push for quality and equity and diversity and inclusion in all spaces.”

She also said that the state of the racial disparity in the U.S. and how BLM has had a mixed success rate in terms of “real” change.

“I think there’s definitely been progress…that’s undoubted, but I think progress in the right direction would be a lot more effective. … I’ve heard and seen organizations advocate and push the government to push things forth like reparations or anti-lynching policies and things like that. …

“Progress in a functional direction would bring about more change,” she said, referring to these issues and the recent declaration of Juneteenth becoming a holiday.

June 19 — “Juneteenth” — has been observed by many Black citizens for a long time, since it marks the day that the last slaves in Texas learned they’d been freed at the end of the Civil War. This year was the first time it has been recognized as a national holiday.

Speaking further on the BLM organization, Harrison said, “A part of their mission statement is to dismantle and protect Black people from systems of power.

“Let’s talk about the system that’s in place, that might not be perfect, but needs some tweaks and adjustments to actually do what they’re called to do, which is to serve and protect the community.”

Harrison spoke on healing and happiness in the Black community amid these issues, and how BSU is moving forward going into the fall semester.

“At BSU, we have three pillars that we stand on, which are to educate, elevate and empower with any event or formal education that we do,” she said. “And so this upcoming year we are planning to have a lot more events that are geared toward … just healing and having fun and having lighthearted conversations about what’s going on in the world.”

For Harrison, being authentic, honest, and loving are some of the core tenets of BSU and keys to having conversations about racial issues.

“BSU welcomes you with open arms,” she said. “It doesn’t matter what color you are, what gender, what you identify as, because I think the most important thing we can do … is treat each other with love and understanding and come from a place of empathy and grace.”

In the upcoming semester, BSU plans to host events aiming to spotlight racial issues and start important conversations, as well as educate Lipscomb students on Black history in Nashville, which was one of the key battlegrounds of the Civil Rights Movement as well as a city where Black higher education long has flourished.