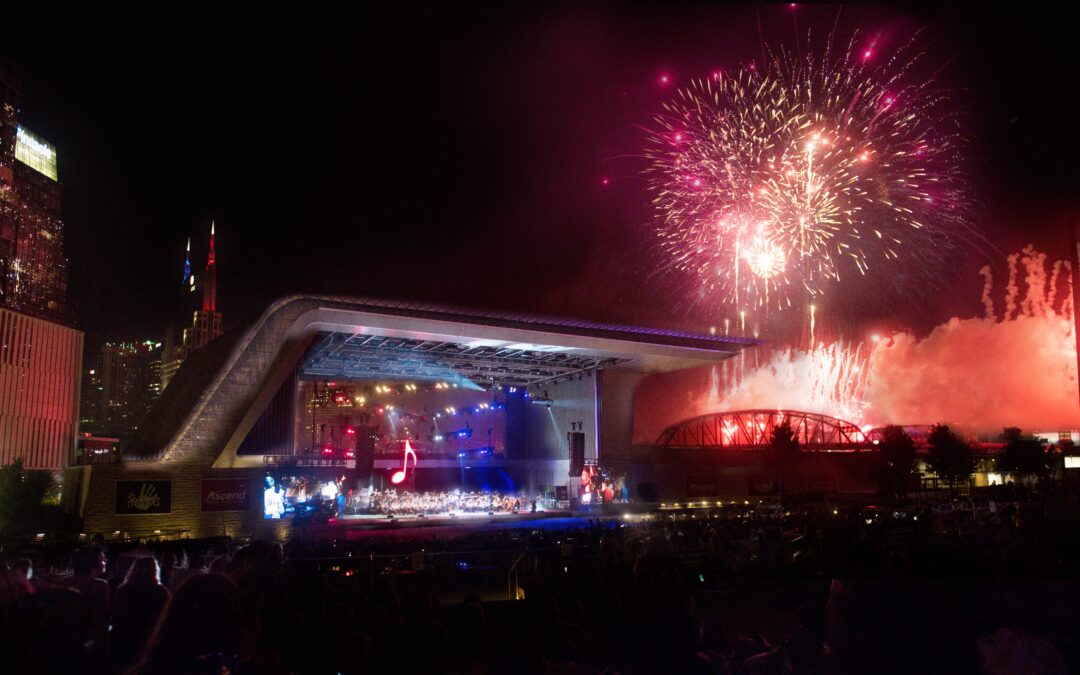 Nashville’s COVID-19 silence ended in a roaring spectacle on Sunday when Let Freedom Sing! brought fireworks and live music back to Music City.

Officials said about 350 thousand spectators attended the event, which began at 4 p.m. and ran until well past 10 p.m. The fireworks were scheduled to start at 9:20 p.m. but were delayed until 10 due to unauthorized people in the explosive danger zone.

Police SWAT officers were called to the Bridge Building following reports from the Metro Fire Department of a person on the roof of the building, according to a press release issued from the Metro Police Monday afternoon.

A flyover from a police helicopter confirmed the sighting.

“While the officers were still in the building and the (police) helicopter remained close by, a security guard apparently relayed to an (Nashville Fire Department) employee that he was the last one in the building.  Without going through command and without checking with MNPD to ensure officers were out of the building, the message was relayed to start the fireworks show.  Command was not advised the show had commenced,” according to the press release.

“Due to the close proximity of the professional firework mortar shells and the fallout from detonated fireworks, the eight SWAT members sheltered inside the Bridge Building until the conclusion of the fireworks show.

“Upon being surprised by the show starting, the helicopter crew took immediate action to quickly move away,” according to the MNPD release.

Attendees planning to watch the fireworks from the legally designated viewing areas experienced the long delay without knowledge of the cause, unaware of the potentially dangerous situation occurring across the river.

WKRN-TV anchors Bob Mueller and Hayley Wielgus — who provided live TV coverage — only had been able to explain that there apparently were some unauthorized people too near the explosives zone.

Earlier in the evening, the event had begun with music from Nashville-based artists Priscilla Block, Regi Wooten and Friends, and Lilly Hiatt at 4 p.m. at First and Broadway, followed by a performance from Let Freedom Sing! headliner and country music superstar Brad Paisley at 8:05.

Paisley was only supposed to do about an hour-long set, but because of the delay, he stretched it out to entertain the throngs while the fireworks danger zone was secured.  The crowd stayed glued to the stage while the singer performed.

Former Lipscomb journalism student Kelsea Ballerini and fireball guitar ace Joe Bonamassa were special guests during Paisley’s set.  In fact, Bonamassa was brought back out during the delay for a bit of dueling guitar action with Paisley, who is one the most skilled guitarists in country music.

At about 10, the delayed festivities moved to Ascend Amphitheater where the Nashville Symphony Orchestra accompanied the fireworks display in its first performance since the onset of the COVID-19 pandemic in March 2020.

The symphony had already gone to work, though, playing at the amphitheater during the delay, so music was coming both from the First Avenue Stage, where Paisley was keeping things calm as well as from the orchestra. The broadcast part of their performance commenced once the rockets began exploding over the Riverfront. When the music ended, the fireworks continued with about five minutes’ worth of massive and loud displays filling the skyline.

The explosive finale was not only said to be the largest firework show in Nashville history but the largest live Independence Day display in the country this year, according to the American Pyrotechnics Association.

The Nashville Convention and Visitor Corp reported that this year’s fireworks show included 40,000 pounds of explosives alongside 200 miles of wire.

“We feel like the city needs this celebration in more ways than one,” said Bonna Johnson, vice president of Corporate Communications at NCVC.

While the past year has been difficult for all due to the global pandemic, Nashville was hit especially hard. The pandemic — combined with damage from tornadoes, floods and the Christmas Day bombing — has had a devastating effect on local businesses and tourism.

Nashville’s tourism industry earned $7.5 billion in direct visitors spending in 2019, but that dwindled to just $3 billion in 2020, according to Johnson.

As the city is beginning to open back up, with many businesses lifting capacity restrictions and mask mandates for the vaccinated, Let Freedom Sing! was designed to welcome Independence Day revelers back to the Nashville they know and love.

And according to Nashville native John Dirugeris, locals were ready to see the Music City shine once again.

“I think it’s a great event and it will be great for the city,” said Dirugeris ahead of the event.

Reportedly, authorities are investigating the reason the police and other unauthorized personnel were in the blast zone.

The 350 thousand spectators in attendance set a new record. Two years ago, at the last display before the pandemic, there were 343 thousand present.

As for the unwanted guests and the SNAFU they caused, police said Monday that “no charges were placed against the four persons cleared from the building … although their actions continue to be under review as part of an open investigation.

“The NFD is leading the review of the miscommunication that caused this situation.”