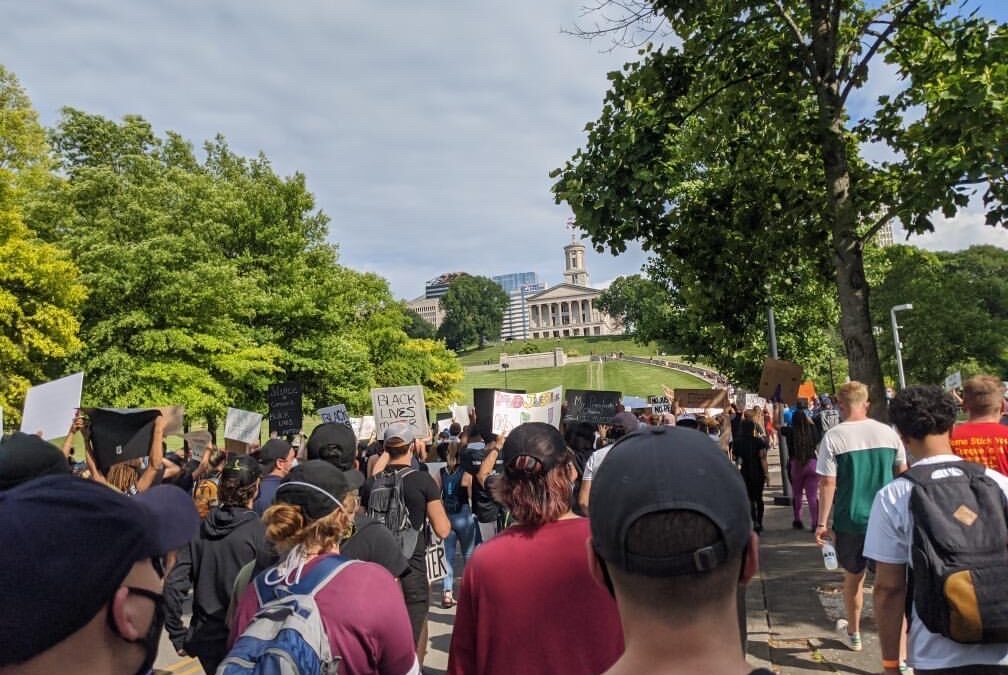 Lipscomb alum Cedric Duncan said there was a great motivation for the 10,000-plus protesters who marched through the streets of Nashville in a rally supporting change after the death of George Floyd.

“If you just talk the talk, nothing changes,” said Duncan, who was among those who began the trek at Bicentennial Mall, through downtown Nashville to the Tennessee Capitol and back in an orderly and peaceful procession.

Much of downtown was boarded up as merchants feared a repeat of the violence that occurred after a peaceful protest last Saturday. But the crowd, which appeared to include at least as many white people as blacks people, was peaceful.

The march planned by high school students occurred on the same day that Minneapolis — where Floyd was killed by police May 25, when one officer held his neck to the pavement by kneeling on it for more than eight minutes — was celebrated by the Rev. Al Sharpton and others, including Floyd’s family and children.

Floyd’s pleas of “I can’t breathe” went ignored and he died. His final cries were for his mother. The officer has been charged with second-degree murder and three other officers who assisted in the fatal encounter also have been charged.

The tragic incident and graphic video of Floyd dying stirred up protests nationwide, in which Floyd’s death was lamented and used as an illustration of  general police action against black men in particular, though black women also have been victims.

“For me, it was more of marching for change in the culture of policing,” said  Duncan, of the massive gathering Thursday in Nashville.

In addition to the killing of Floyd, the protests nationwide, including in Nashville, also highlighted the recent killings of Ahmaud Arbery and Breonna Taylor.

Taylor, 26, an emergency room technician in Louisville, Kentucky, was shot at least eight times March 13, after police used a battering ram to crash into her apartment, acting on a “drug tip.” After a confrontation the bullets from police began to fly.

Three men — including a retired law enforcement official — have been charged in connection with the death of Arbery, who was gunned down while jogging Feb. 23, in rural Brunswick, Georgia. Arbery, who was 25, was unarmed, and the men chased him down and shot him to death.

“Officers need to be more about questioning their superior officers and wanting to do things right,” he said.

Lipscomb President Randy Lowry spoke out Monday about the killings of Floyd and the others and the issue in general. The story about that is on this page.

According to the Instagram post’s comments, his response received more negative than positive feedback on social media, so he has addressed that and further expanded and clarified his message in a statement:

“After listening to feedback about my message on Monday, my heart breaks to know the pain it created for some members of the Lipscomb community, especially our black faculty, staff, and students. The intentions in my mind failed to translate into the message the hurting members of our community expected to hear from their university president. I am sorry for the hurt and disappointment my message created for others, but getting the message right is not enough. It is obvious that change must occur, but I know many of you will say you’ve heard this before. Please continue to hold us accountable. Watch and see the progress we will make. Black lives matter to me. May we live that truth.”

Though  protesters have used slogans this past week of  “Speak Louder,” most students contacted by Lumination Network declined the opportunity to voice their thoughts.

Duncan was not among those who declined to address the issue.

“In big bold letters, GO VOTE,” he said. “Register to vote, register a friend to vote. Figure out ways to sign petitions, to call Congress, local politicians. Even just leaving a message asking them to ‘don’t sponsor these bills.’ Go follow pages of different organizations and see what they are about.

“Read up on different things that have happened in the past that can influence the future. Know your history.”

Duncan suggests reading about, Emmett Till, the Tulsa Oklahoma riots of 1921, segregation and how it has affected the criminal justice system and the community.

“A lot of people are asking if we should vote or protest, and it’s not an either-or, its a both-and. You have to fight for it.” 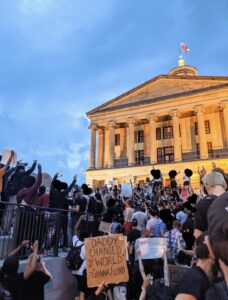 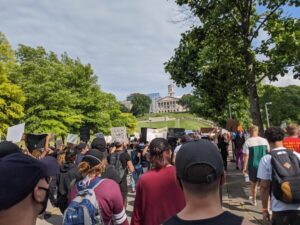 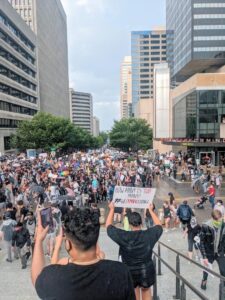 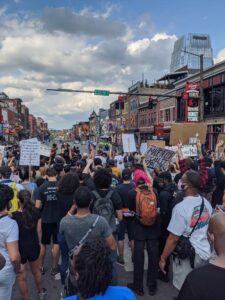 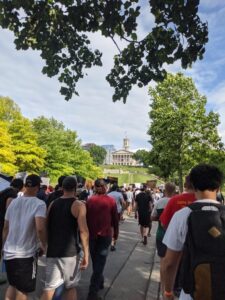