How Lipscomb is engaging in creation through composting 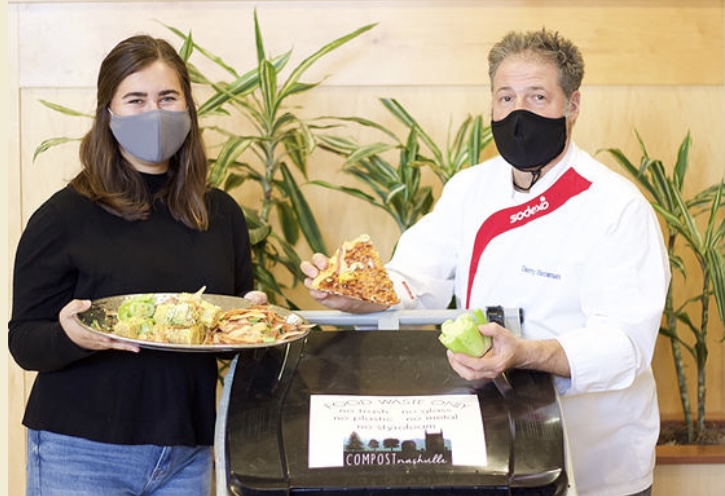 Bison Compost is a new initiative that began last fall on Lipscomb’s campus that is seeking to reduce food waste in the cafeteria. So far, 5,072.5 pounds of waste have been diverted from the landfill. That’s equivalent to the weight of a Range Rover.

The student leader behind Bison Compost is Isadora Koch, a Junior Environmental Sustainability Science major with an emphasis in Communication and Policy.

Koch started Bison Compost as part of a fellowship called Youth Evangelicals for Climate Action that requires that the members complete a sustainability-related project. Koch had learned a lot about composting, and when she saw how much waste there was in the Lipscomb cafeteria, she wanted to help start composting on campus.

Koch began by talking with her advisor, Dr. Stutzman, who directed her to Darry Hunstman. Huntsman serves as Executive Chef in the cafeteria and has been a sustainability activist himself. In addition to being a farmer and beekeeper, he also worked at William-Mary College, where they already were composting. Koch shared her vision with him, and he agreed to collaborate with her in getting the composting initiative instated at Lipscomb.

The first step was figuring out who to partner with, as on-site composting would be difficult and space-limited. Koch found Compost Nashville, which specializes in organics management. They figured out pricing, and a representative came on campus for assessment. With the help of volunteers, a waste audit was conducted in the cafeteria.

Because of the new COVID-19 protocols and the required training, it was decided to start capturing food waste from the food preparation side.

“I was actually really surprised to learn the student waste and food preparation waste were almost equal in terms of the amount that was getting thrown away,” Koch recalled.

The initiative’s website is bisoncompost.wixsite.com/info and serves to provide an updated diversion report that’s accessible to students. It also offers information about composting and details about the campaign.

She explained, “My plan is to work alongside SGA since they have a connection to the administration. I’m hoping the composting campaign with the website and posters will engage more students. Composting isn’t complicated. It should be regarded as a responsibility of an institution to manage our outputs, just as we pay for getting things to the landfill, etc.”

When asked about how her passion for environmental sustainability began, Koch elaborated, “In high school, I took an AP Environmental Science class. I learned about ecological systems and the intricacies of nature, as well as how in so many ways we’ve deviated from the provision God gave us to be able to steward things well.

There’s this saying, ‘Composting just happens.’ I thought that even if I threw orange peels away, they were biodegradable and wouldn’t contribute to lasting waste. That isn’t true.”

Koch described why composting is important. “When food is sent to the landfill, it doesn’t have oxygen. It has to decompose anaerobically and releases methane, which is contributing to climate change. If it weren’t for us prolifically discarding things carelessly, we would be able to participate in a more circular system that turns food waste back into something that can be used as a soil additive. Learning about it from a creation-care standpoint means that we are co-stewards with God in serving and protecting what God has created. It’s not about unfettered exploitation and degradation- that’s not a right that we have. It’s rather about a divine duty to live in harmony.”

The funds for Bison Composting are currently coming from SGA, which Koch appreciates but knows isn’t conducive to making enduring changes. Her goal is to reach out to the administration so they can realize composting’s importance and take on the funding.

Since Lipscomb will be getting a new president and working on its 10-year plan, Koch wants sustainability integrated into the ethos of Lipscomb.

She added, “I’m also interested in changing to a system of reusable take-out containers in the cafeteria. The sheer volume of things that are thrown away (Styrofoam, plastic, cutlery) is pretty obscene, and there are cost-effective solutions that end up paying for themselves. Convenience shouldn’t compromise sustainability.”

When compared to other schools in the Nashville area, Lipscomb is behind in sustainability efforts. Koch explained, “Other colleges in Nashville already have composting digesters. One even has a ban on plastic water bottles- they don’t sell them on their campus. Aside from our responsibility as a Christian institution to engage in creation, we also have to think about taking on these initiatives as a way of staying ahead and not fall behind.”