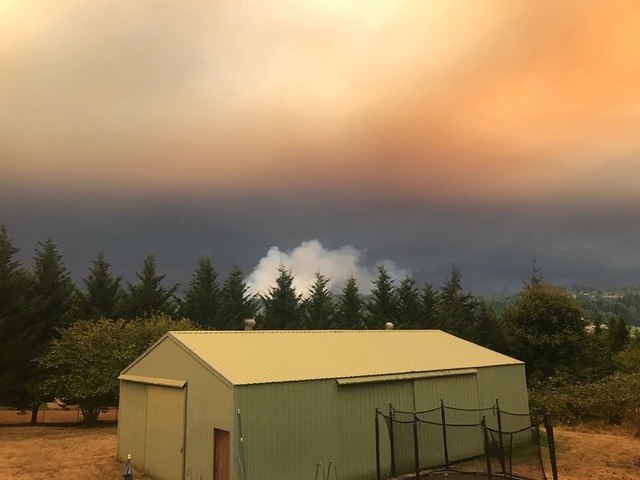 Lipscomb students, with families trying to survive the firestorm consuming the West Coast, anxiously await word from home while also watching news reports about the most-extensive wildfire carnage in history.

The West Coast, from down near Los Angeles all the way up into Washington State, is on fire, forcing states of emergency to be declared in the big cities as wildfires incinerate whole towns, flames lick at the edges of urban areas and skies turn orange/yellow as fire and smoke pollution filters out the sun.

“My sister says it smells like a campfire no matter where you go and feels like you’re coughing up ash.”

The flames are not the only safety concern for regions affected, air quality from smoke settling in valleys has created hazardous conditions that are only expected to worsen. The areas around Corwin’s hometown are under advisory for these conditions.

“It’s tough, because I keep calling my family…. It’s hard to see everything being affected by it and just seeing pictures. It’s just completely insane. … I just like feel like I wish I could be there with them,” said Corwin.

“My family camps every year.… We had a reservation for this year but it got canceled for COVID, and so my grandpa hopped on (the computer) and made sure to get it for next year because we all wanted to go camping….  They emailed him and sent a refund because literally everything was destroyed,” Corwin said.

“It was terrible, I cried, and I was like, out of everything that’s happened this year, like, this is something that’s just in a way like my childhood home.”

An estimated 10 percent of Oregon’s population has been evacuated as flames close in on residential areas. Evacuees include the family of Lipscomb Junior Anna Vander Kamp.

“There’s a smaller fire right by my house, so my family actually was evacuated on Tuesday; and so they were able to go to my grandparents, like 30 minutes away,” said Corwin.

“It just was weird to wake up to a text from my mom saying that they had been evacuated, and I knew it was a possibility, but just nothing like that’s ever happened.”

Vander Kamp is a computer engineering major from right outside Portland,  which, because of the smoke, has the worst air quality of any major city in the world, she said, “people who I know that live closer to Portland, they’ll walk outside or even in their house and just feel smoke and their lungs hurt. It’s scary stuff.”

Evacuations open up a whole other concern for Vander Kamp when they’re happening amid a pandemic. “My dad is high risk. He is on immunosuppressants, so we’ve been super, super careful.… I know my grandparents have been super safe, so I don’t think it’ll be a problem. But it was also scary just him being exposed to now, their circle as well as our circle,” she said.

“We were one of the lucky ones that have family (to go to for shelter). Probably lots of people have to be in hotels or places where they don’t know where people have been in there. …That’s definitely nerve-wracking to want to be careful about COVID but also have to evacuate.”

In Oregon, authorities are making plans for recovery of mass casualties from some of the towns that have been torched from existence.

Officials in all three states along the Pacific are blaming climate change and global warming for the fact the fires were able to take such a deadly foothold in the mountains and valleys.  An example of that is San Francisco.  That city has a fairly consistent temperature of 55 degrees year-round. One day last week, the temperature reached 101 degrees.

For both Corwin and Vander Kamp, wildfires of these kinds are unprecedented. “I’ve never felt like physically in danger due to any kind of natural disaster like that,” said Vander Kamp.

Corwin adds “I’ve lived there for 20 years, like as long as I’ve been alive, and it’s never been that bad so that’s what’s mostly surprising to me is, like, why on earth is it like all of a sudden like this?” 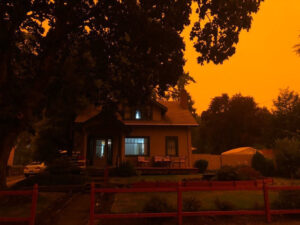 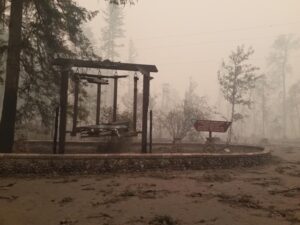 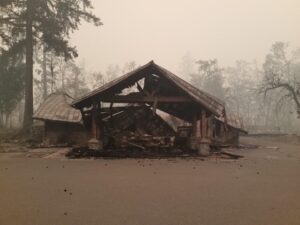