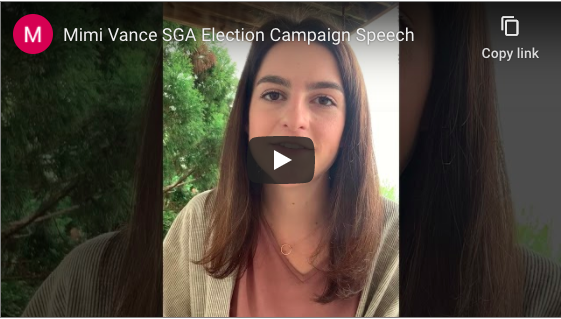 Election season has once again made its way to Lipscomb’s campus; however, this year campaigning is being done in an electronic format. SGA is hosting their elections for the 2020-2021 school year Tuesday, April 14; polling will be conducted via email for the offices of president, vice president, secretary and treasurer as well as tenators.

“I really wish I could be with you guys in person,” said Mimi Vance in her campaign video to students. Vance is running uncontested for the office of SGA president.

“If I’m elected my top priority and number one goal will be to listen to you guys,” Vance said in her video directed towards students.

“I think SGA can do a lot better on being transparent with our student body, to me that looks like using social media a lot better…using our blog and website better…as well as thorough recaps of all our meetings to be posted.”

One commitment Vance is aiming towards is creating open-door office hours to encourage transparency, which has become a popular issue among SGA candidates.

“The vice president must communicate clearly, keep discussions open and clear and be a leader on campus for those whose voices need to be represented.” Says vice president candidate Will Huff.

The running for vice president is high contested this year. Alongside Huff, the candidates are Nate Messer, Patrick Smith, and Dexter Woods.

The election will take place between the hours of 9 am to 3 pm CST. Students will be emailed a ballot by election day morning. For more information and campaign videos from those running for office, check out the email sent from the SGA office.