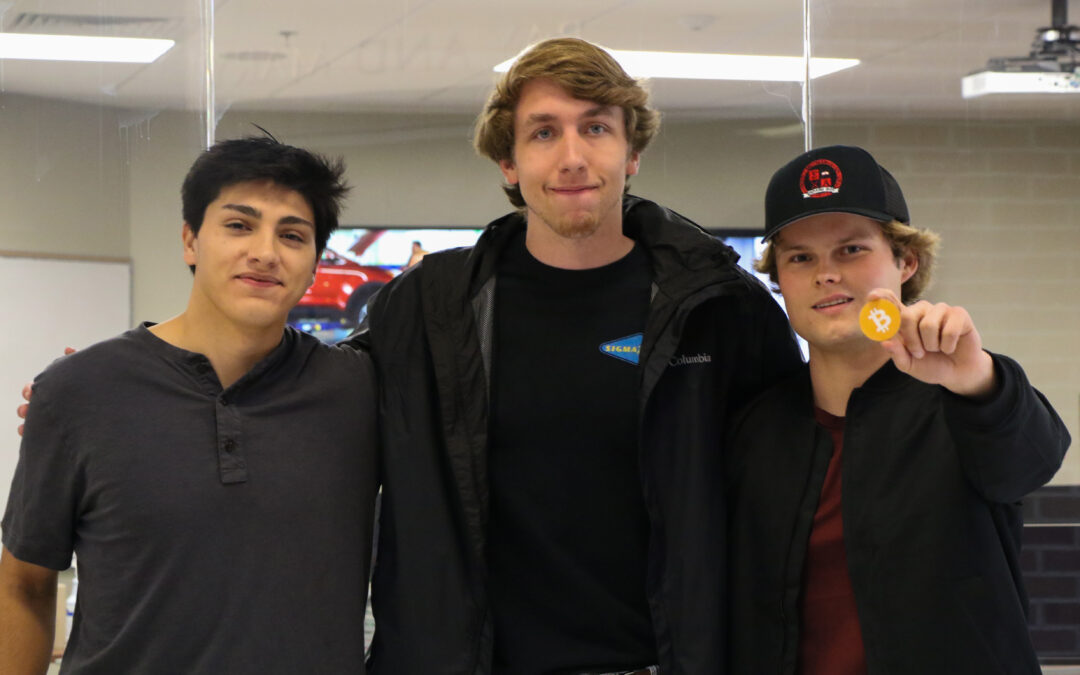 Of the several social clubs at Lipscomb, only one will accept your club dues through Bitcoin. Sigma Alpha is pioneering the introduction of cryptocurrency to college organizations.

Sigma Alpha started in 2019 and is a smaller and relatively newer club that prides itself on its recent innovation. Sean Hagan, a junior philosophy major from Nashville, introduced the idea of incorporating Bitcoin.

Hagan is the president of the club and sees Bitcoin as a way for his younger group to build their reputation as well as their finances. This fall was the first semester that members were able to pay their dues in Bitcoin instead of dollars.

“We have to find these creative solutions and innovative ways to protect and maintain at least what we do have, potentially build our purchasing power, and increase what we’re able to do,” Hagan said.

Bitcoin is a relatively new and upcoming currency that takes place all digitally. Unlike fiat currency, government-backed money like the U.S. dollar, there is no paper trail.

Even before it was officially created in 2009, Bitcoin has had an interesting and somewhat mysterious history.

“Bitcoin is a digital asset. It was created in the wake of the [economic] crises by the man or entity under the pseudonym of Satoshi Nakamoto,” Hagan said.

The identity of Nakamoto is entirely unknown. Prior to Bitcoin’s creation, they published a paper that explained its function and use.

“It’s built on the concept of digital scarcity,” Hagan said. “There are only 21 million bitcoins that will ever be in supply.”

Bitcoin’s set value is what makes it stand out from other value systems such as gold or fiat. Where countries constantly print more money and more gold is often discovered, Bitcoin will never exceed 21 million coins.

Its moveability is another factor unique to Bitcoin. It is stored in digital wallets and can be instantly transferred across the world. Sigma Alpha uses one of these known as a lighting wallet. Hagan said that they quantify them as the smallest units of Bitcoin, known as a satoshi.

“If you want to pay in Bitcoin we’re just going to add that to our stack of Bitcoin,” Hagan said. “So we have a lighting wallet set up so members who want to send us Bitcoin will do so through the lighting network, and we will hold their dues.”

Hagan, being a strong supporter of Bitcoin, said that when he brought up the idea to other senior members of Sigma Alpha it was easy to gain support.

“When I explained this to our club there was little to no pushback at all,” Hagan said. “[Other senior members] played integral parts in planning for this, how to figure out how to actually go about it, and find a correct way to do it and bring it to life.”

Another appeal of Bitcoin for the members of Sigma Alpha is its legitimacy.

Because of the way Bitcoin is structured, Hagan said, “it’s auditable, verifiable, transparent so you can see who is sending money where. You can check to make sure transactions are authentic. There’s also that safety net of authenticity built into the network as well.”

Not only is Sigma Alpha taking dues with Bitcoin, but they are also attempting to increase their club’s overall holdings of it.

“Right now we have 5% of our wealth stored in Bitcoin and we’re looking to find ways to increase that percentage in a responsible way that would reflect the interests of all of our club members,” Hagan said.

As a concept, Bitcoin has been intriguing for many, but what is often overlooked is the process of mining Bitcoin. Since Bitcoin is cryptic, it is a digital mining process that involves algorithms and a lot of numbers. Special computers are required that use a large amount of power.

Only over 18 million of the available Bitcoin has been mined, and the value often fluctuates when it is. As Bitcoin grows, the debate over the environmental impact of mining has risen.

Hagan says that when it is mined with unclean methods to mine, such as coal, it can be problematic. Hagan says that now that China has put bans on Bitcoin mining, it is moving to the states, and methods are improving.

States, such as Texas are working to bring in this industry and encourage them with better processes. Other critics find that despite the improvements, it is still harmful.

Hagan said, “They’re building that infrastructure in a responsible way that uses green energy like solar and hydroelectric.”

He added, “I think [green energy] is going to continue to increase. I think that as Bitcoin mining becomes more responsible and more sustainable it only strengthens the network.”

Sigma Alpha is hopeful that their welcoming of Bitcoin will encourage other clubs and even individuals to do the same.

“Do your own research,” Hagan said. “Start looking into what makes Bitcoin work, what makes it a viable solution. Why do people call it gold 2.0.”

As cryptocurrency has boomed in popularity, people are considering it as a better option than the current system. El Salvador has even adopted it as an official currency.

“Push the boundaries, move into the 21st century,” Hagan said. “The U.S. dollar is really backed by nothing. We’re trying to show people that there’s another way.”