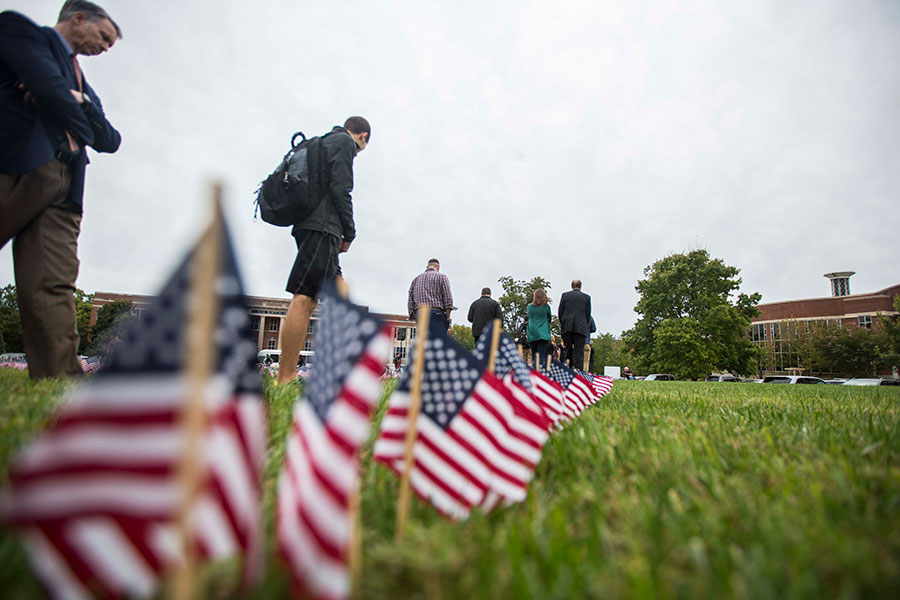 COVID caused the city of Nashville to cancel this year’s Veterans Day parade, but that didn’t stop Lipscomb University from shining the light on the contributions of veterans.

“Personally, I do not think the lack of a parade will have a large impact on Veterans Day,” said Andrew Santander, president of Campus Veterans Organization. “Veterans Day serves a much larger purpose than the need to be celebrated with a parade. I served because of a larger purpose, for my brothers and sisters to my left and right.”

Veterans Day at Lipscomb University is going to look a little different but keep its usual spirit. Lipscomb’s Veteran Services will continue to hold events so that veterans and nonveterans alike can remember those who have served.

There will be American flags set up around the center of campus and yellow ribbons tied around some of the trees of campus. If you want to tie a ribbon to honor a veteran, you can pick one that has been cut to the appropriate length at the campus Starbucks.

Additionally, there will be coupons for veterans for a free meal that can be used throughout this week. It qualifies veterans for breakfast, lunch or dinner in the upstairs cafeteria of the Student Center. The coupons will be available at the Veteran Services office.

Most people today know the celebration as Veterans Day, but that’s not what it always has been. The holiday was originally called Armistice Day and began as a reminder to honor those who served in World War I. The Armistice, ending the First World War was signed November 11, 1918.

The act to declare Nov. 11 a national holiday of remembrance was signed into law in 1938 by President Franklin Delano Roosevelt. It wasn’t until 1954 that President Dwight David Eisenhower changed it from Armistice Day to Veterans Day. Eisenhower had been supreme commander of the Allied forces in the European Theater of Operations during World War II.

Veterans Day this year may be a very important one in this nation’s history as it will provide a chance for everyone to come together in saluting the service and sacrifice and perhaps momentarily overlook the division caused by COVID, partisan politics and economic and social turmoil.

“It provides (vets) the opportunity to come together with friends … and bond,” said Santander. “Some of these men and women only get out a few times each year, Veterans Day being one of the times.

“This is vitally important for their overall mental and physical health, and unfortunately, they may not be able to reunite with their brothers and sisters for a long time,” because of the social distancing required to live in the COVID era.